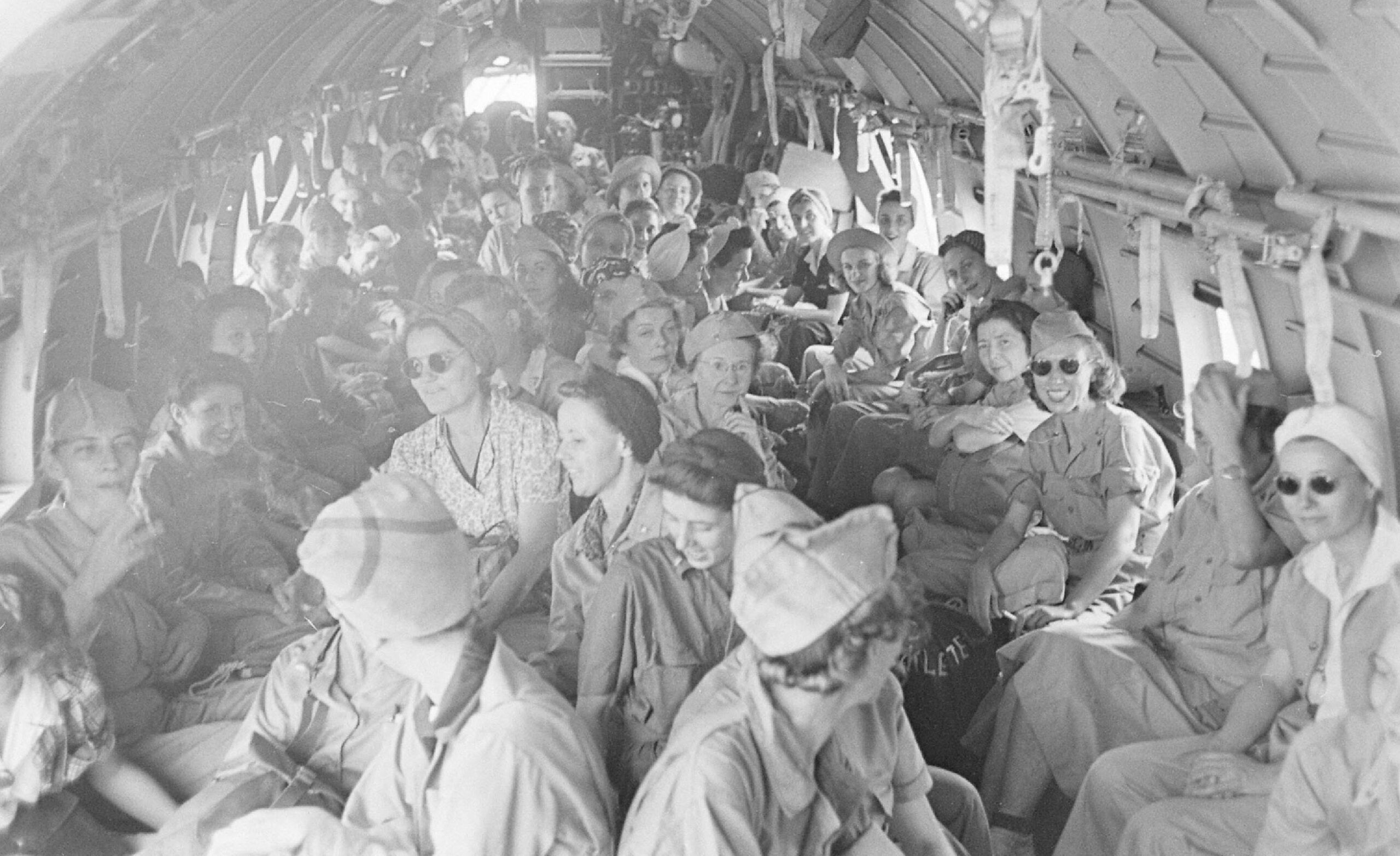 These words were attributed to Lt. Col. Madeline “Madge” Ullom who was among the band of nurses who courageously and indefatigably served during WWII in the Philippines, and who were, are and forever will be known as the Angels of Bataan.

Nebraska-born Ullom served in the U.S. Army Nurse Corps, as she followed in the footsteps of her older sister Cathern Mary, who had earlier graduated from the U.S. Army School of Nursing.

There was an opportunity for her to become a civilian nurse with the Civilian Conservation Corps; however, she was determined to become an Army nurse.

“I wanted to come in as a regular army, and at that time, there were only 625 in the corps, so one had to wait until someone died or retired. But very fortunately for me, there were several retired at Walter Reed at the time that I was available to join the corps,” explained Ullom of how she became an Army nurse in 1938 as she moved from Philadelphia to Walter Reed in Washington, D.C.

Then, it was ideal to be assigned to the Philippines.

“It was an ideal assignment, and at the time that I was there, it was considered one of the choice assignments of the service,” she said in a 1985 interview with the Women’s Overseas Service League.

Ullom said back then there had already been ominous forebodings of something was going to happen but “we really didn’t think that anybody would really declare war on us.”

She was close to completing her two-year duty in the Philippines when Pearl Harbor was attacked, Manila was bombed, and soon the Japanese had invaded the Philippines.

“We could hardly believe it. It was only a very short time until they were landing forces on Northern Luzon…,” said Ullom.

As the invasion continued, and when Manila was declared an open city, the nurses and other staffers at Sternberg General Hospital in Manila, the U.S. Army hospital there, were evacuated to Bataan, then to Corregidor.

On Corregidor, the so-called “impenetrable fortress” across Manila Bay, the nurses went about their regular duties in the Malinta Tunnel tending to the wounded soldiers.

She recalled the sheer number of casualties that even their chief nurse Ann Mueller, whom previously served as chief nurse in Walter Reed, had to double duty as an anesthetist.

Ullom said the Japanese were determined to take Corregidor. Soon they found themselves outnumbered even as the men gallantly staved off the invasion. On Corregidor, the Americans had to capitulate.

They witnessed the Stars and Stripes being replaced by the Japanese flag.

“We women wept. The men, many of them wounded and all of them exhausted, did not give way. They stood straight and firm, but the whole story was written in their faces,” narrated Ullom in an article that saw print in the Woman’s Home Companion, and reprinted by the Nurses’ Alumnae Association Bulletin in June 1945.

She said there were 64 of them, nurses, who were taken from Corregidor to Manila. They thought when they had spoken to a U.S. -educated Japanese officer that they would be taken to a hospital to care for the wounded, but they were brought to Santa Catalina Girls School in Manila where they were packed in two rooms for six weeks where Ullom said they felt constantly on edge and where they were locked and kept from communicating with anybody.

Santa Catalina Girls School was converted into a hospital and the nurses were taken to the University of Santo Tomas, the oldest university in the Philippines founded by the Dominican order of Catholic priests in 1611.

“It’s a royal and pontifical university, and the people there were very good to us. The liaison between the university and the internees was a professor,” she said.

At Santo Tomas, women and men were not allowed to commingle, families were separated until the restrictions were relaxed.

An order was issued that allowed the internees to build shanties on campus grounds where families could get reunited and have semblance of home life.

Ullom and the rest of the nurses were in the main building. She said women and children occupied the second floor and “invalids” were on the third floor. The men, she said, occupied the uppermost floor.

There they were given a bed space three feet wide and six feet long, and two feet space between beds. “We became quite streamlined,” she said.

The Japanese had allowed for men and women to get together outside “but not too close.”

She mentioned about the difficulty of keeping a good personal hygiene, that one of the hardest problems was simply the effort to keep clean. “We soaked our clothes in fire buckets overnight to save soap.”

For many of them staying in the main building, they barely had enough time to wash their face and hair and clothes.

Internees had “lugaw” or rice soup

Ullom mentioned about the internees eating twice a day, once in the morning and once at dinnertime.

“We had a plate, cup and spoon, and we got a scoop of real watery rice, morning and evening, and a scoop of watery vegetables, and sometimes there were a few shreds of meat in it,” she said.

[In the Philippines, there are different ways of preparing “lugaw”, the rice soup staple for the common people. Usually, in the Tagalog region on Luzon, glutinous rice is sautéd in garlic, onion, and meat, and boiled in broth. In the case of the Santo Tomas Internment Camp, it may or may not be “lugaw” that was fed to internees. But in my hometown, watery rice can also be loosely called “lugaw”.]

Everyone had work to do

Ullom talked about how every adult in the camp had something to do for the group. “Everybody in camp had to work. Everybody over the age of 16 had to work unless you had a doctor’s certificate.”

Women, she said, were in charge of debugging rice. Another group was to serve in the mess hall or to collect garbage.

Some professionals were able to practice their professions in camp. Don Bell, a famous broadcaster, was in charge of entertainment after dinner. He would make the regular announcements and play music.

As time wore on, with many suffering from tropical diseases and starvation, many had been reporting late for their camp duties, Ullom noted.

“And many people were late in reporting for camp duties, and they didn’t have much energy,” she said.

Ullom also ackowledged that Red Cross had been sending packages to the Philippines. In the three years they spent in Santo Tomas, Ullom said they only received three Red Cross packages from South Africa, Canada and the United States. These survival packages contained mostly food necessities.

Women not allowed to show knees

Ullom also said initially the women were restricted from wearing clothes that show their knees. As their clothes began to wear out, having been only allowed to to pack clothes for three days when they came in, the Japanese had eventually relaxed this knee rule.

7 patients died of starvation in 28 hours

Another interesting story that Ullom shared was how their camp medical director Dr. Stevenson was warned by the Japanese authorities not to indicate on the death certificates that the internees had died of starvation or malnutrition.

Ullom said Dr. Stevenson stood his ground to state the cause of death as he was duty-bound to do so. The Japanese kept him imprisoned until the Americans came to liberate them on Feb. 3, 1945.

Bowing to the Japanese

Ullom also complained about the constant bowing to Japanese soldiers regardless of their rank every single time the internees would run into them. She found this very annoying. “You stayed six paces away, and you bowed very slowly from the waist with your arms very stiffly at your side. And what really got us was the philosophy behind it because that meant that we express our appreciation to the Japanese for what they did.”

So when the U.S. Army 1st Cavalry liberated the internees and forced the remaining Japanese to surrender, as the enemies were being taken out of the camp, the children had been clamoring that they bow to them. “Make ’em bow! Make ’em bow,” Ullom echoed what the children had wanted the Japanese to do. She said naturally the American soldiers were not aware of what the bowing practice was all about.

She even remembered a soldier offering instead an ice cream cone to a child frustrated at not getting to see the enemies bow back. “What’s an ice cream cone?” Ullom remembered the child’s response to the soldier as she burst into a hearty laugh. Children born in the camp had never known ice cream in their life at the camp.

“I don’t know. I’ve never had ice cream but I’ll take a camote,” Ullom remembered the child saying to the soldier thinking that camote was such a luxury for them who had been born in camp.

The nurses from Santo Tomas were eventually flown down to Leyte where they stayed for a few days and where they were awarded their Bronze Star.

They were taken later to Hawaii and eventually were sent home to their families.

In her lifetime, she had since returned to the Philippines four more times.