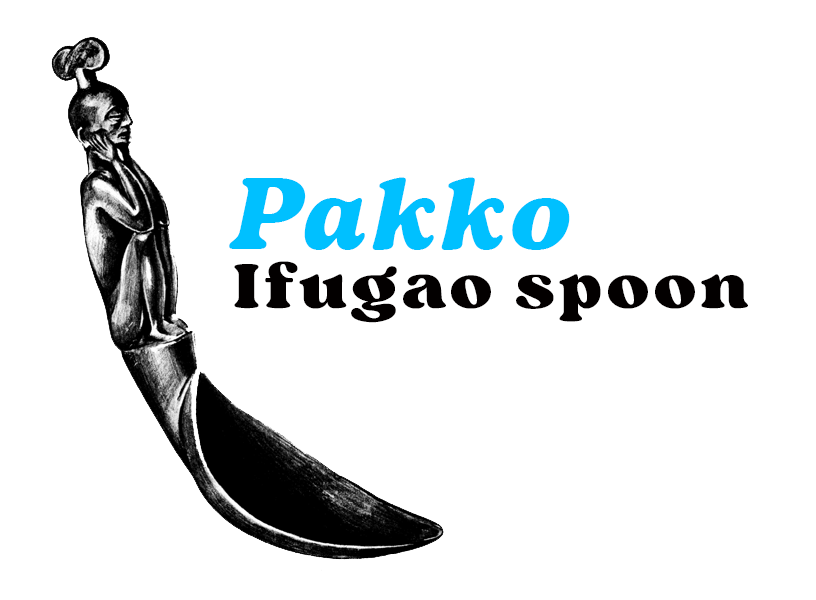 There it was on the cover of Philippine Magazine‘s February 1934 issue: a wooden spoon with an anthropomorphic handle. Unlike the common cutleries from the western world, each spoon bore a unique design reflective of their folktales or their way of life.

The Ifugao of the Mountain Province in northern Philippines has been a thriving society for thousands of years. Take for instance the rice terraces of Banaue, a hallmark of the Ifugao ingenuity. They have been standing for more than 2,000 years. And the use of certain implements or tools like the pakko or spoon to the modern-day world may have been as old as the practice of planting rice on the terraces.

According to the A.V.H. Hartendorp’s article, every household or clan has an artisan devoted to making the unique designs. The handles represent gods or mythological heroes. Some handles are made in the likeness of a mother and the child, or a father carrying a child on his back.

In the more affluent Ifugao homes, each member of the household has his or her own spoon hooked up on the wall when not in use; however, men usually would stow their spoon in a hip bag and carry it outside their homes.

Based on earlier research, pakko is handed down from one generation to another as an heirloom. A grandfather or a father’s spoon is considered valuable. For a guest to be offered the use of this heirloom is a great privilege and an honor.

The Ifugao spoons and their anthropomorphic handles are unique to this cultural group, the Philippine magazine article stated. “They are found nowhere else in tribal Asia or Oceania.” Hence, if one were to look for them on ebay or in antique shops, they command a hefty price. Those with intricate designs fetch for $200 and over.

Moreover, It is customary for Ifugaos to carefully clean every spoon before and after eating; it would be the height of impropriety if it were to be offered unwashed to anyone.

Spoons are used to scoop food or water from a wooden bowl. In the common homes, the members of the household eat from the same bowl and there are rules to dining that apply to the family; however, these rules are suspended on account of the visitors.

Some of these exquisite spoons have found their way into museums and private collections around the world.