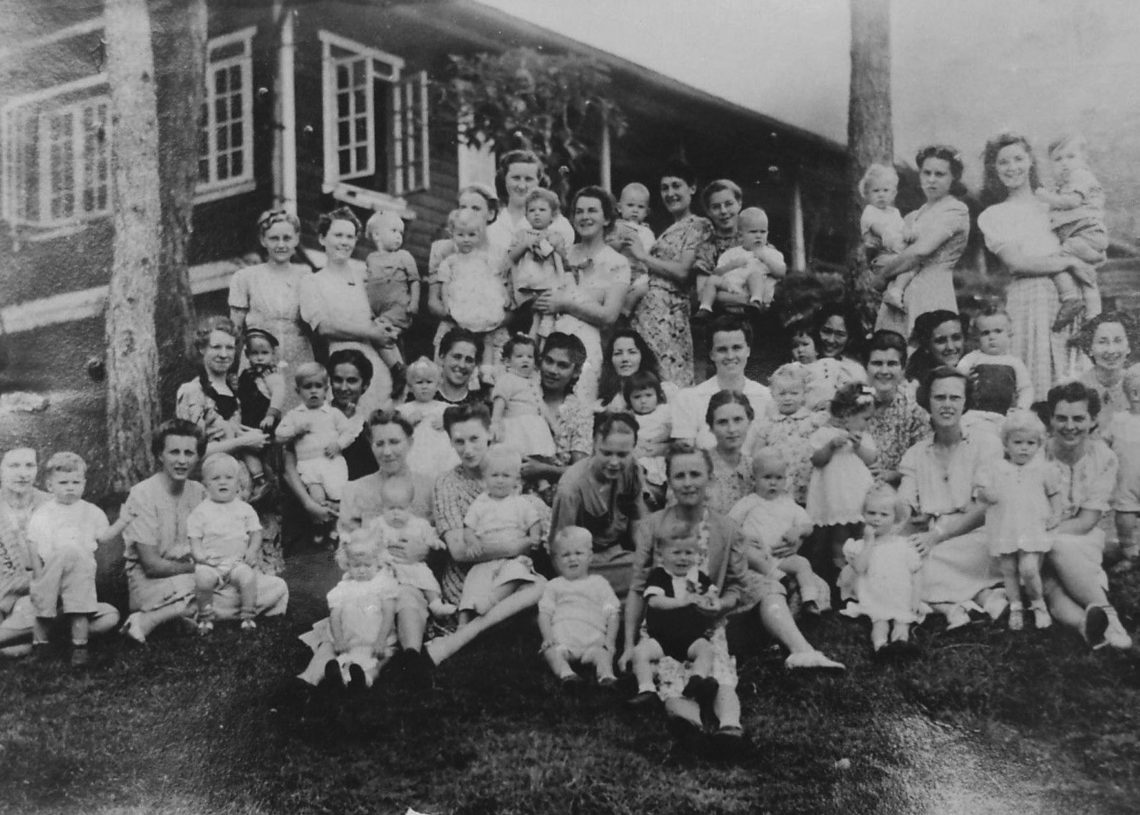 Teddy Tyson, wife of Singer Sewing Company executive James, reluctantly knitted a pair of socks. She finished it anyway and still managed to complete a pair that her friend, Ora Robinson, was also working on. When done, she gave the knitted socks to Herbie Zwick who had asked her the favor to do so two days prior.

That night she knitted, she saw the other women too were silently working on theirs. But neither one bothered to say a word to each other about what they were working on until the next day.

It was roll call at Camp Holmes. They stood and bowed to the Japanese officer before them. And all hell broke loose when it was discovered that two men had been missing and presumed to have escaped.

“So we knitted, a bunch of us, knitted those socks. But then the next morning at roll call two men had disappeared. And they were the men… one of them was the man I knitted the socks for. And just walking back, I said, ‘You know, I knitted a sock for Herbie. He just picked it up last night,'” stated Teddie as she found out that the women in the camp had knitted 32 pairs of socks for Herbie who took these socks with him to the mountains where he joined the guerrilla forces.

“And not one woman had told the other woman what they were doing. So you see, we had been trained never to talk. Even among our best friends. I wouldn’t say a word for fear I’d get caught because you didn’t know who was your best friend. You’d think they were, but under pressure a person can do anything,” she said.

James Tyson, in his interview with the University of Northern Texas in 1970, stated, “The Japanese were furious, and they told us we would have no meals that day, and we would all go and assemble—men and women—in one barracks and they would interrogate us. So they lectured us, and they talked to us, and through the camp interpreter they told us how good they had been to us and how we had abused their confidence….”

Nora Ream Kuttner, in her Vista College interview in November 1989 said that those whose cubicles near the escapees were taken down to headquarters and were mistreated.

Her sister, Katherine Ream Sobeck, thought the escape plan by Zwick and Green “was cleverly plotted.” However, she said the escape led to a lot of people taken out of the camp and brought them to military police headquarters for questioning.

Their brother John Ream, who after the war was able to interview Zwick himself, provided more depth to the story.

He narrated how Zwick had been planning for days. As Zwick was part of the garbage disposal team that would take out trash outside the camp, he and fellow internee Doug Shaw managed to sneak out one time and met with Colonel Calvert. Zwick knew that it was only a matter of time that the Japanese would soon discover that he was an American soldier after all and that would have meant capital punishment. So he told Colonel Calvert he had to bolt out of the camp.

“Prior to my escape the only one who knew I was going to leave was Doug Shaw, he had gone in and out of the camp with me three times. The night we escaped Doug helped us carry out medical supplies and boots that we brought into camp on the two previous occasions to have them repaired. Johnny McCuish was a shoemaker; I told him, ‘Here, repair these boots and
don’t ask any questions,'” Zwick told Ream.

He had also given a confession with Fr. Robert Sheridan that Sunday, April 2.

On the eve of April 4th, he ran into Bill Moule who had had known for a long time that he had been planning and escape. “Bill, this is it,” was what he said to Moule.

The following day, Moule, Halsema, and Kneebone were taken down to headquarters by the Kempeitai where they were to endure five days of torture. Camp commander Rokuro Tomibe intervened on their behalf and sought their release back to the camp, and thus saved their lives.

Natalie Crouter chronicled this incident in her diary.

On April 14, 1944, she wrote at length: “Special Section on Bill, Gene, and Jim in jail. Bill was strung up by his thumbs four times in four hours. They tied his hands behind him, then tied the thumbs and pulled him up with arms behind him. He could touch the ground with his toes, which helped a little, but the back was bent over and the head down, lasting for about twenty minutes each time. They hit him from underneath, in the face; they beat him with sticks, kicked him in the ribs. Once he told them that Americans wouldn’t treat a dog like that and they beat him unmercifully. The fourth time they strung him up they ordered him to get up on a chair, and he wouldn’t. Five of them jumped him at once, and he ended standing on the chair, where they handcuffed his hands behind him and strung him by the thumbs again. He said he kept hoping he would faint but he is too powerful and could not, so he kept striking his head against the door, trying to knock himself out. They beat him for this too. He said he was not conscious of making a sound until he saw a Filipino crowd gathering outside to find out what was going on. Then the Japanese put a gag in his mouth, and he dimly realized he must have been yelling. Twice his shoulder was pulled out of the socket, and they took him down to put it back in. He has a huge black spot on one leg, another on one arm. He says the Filipinos fed him afterward and he ate like a horse for four days, yet he is twelve pounds less than when he left here even after all the food. He sweated so that he stood in a pool of water. What they wanted to know was where the men went, who took them, and what way they went, how we got the news and who got it. Much of this he could not answer—which made it only worse. At last he lost track and doesn’t remember much. He could only give them a vague idea of the destination anyway. After it was all over they told him they had all the information they wanted anyway after torturing chicay, the meat seller, and two others, one of whom they caught with a script of news from K.P., a guerrilla.”

She also narrated how Tomibe sought for their return to the camp.

“Tomibe went into town in the car this morning and brought Gene back alive. He was taken right down to camp hospital, able to walk by himself. At the top of the steps stood little Terry and Kim. Terry shouted ‘Daddy’ and ran to him. Gene patted his little rear softly, saying his name over and over. Gene is bruised and took a tough beating because he really did not know a lot of the answers, but he passed out into unconsciousness and they had to cut him down and take him to the military hospital. Before he left jail, he says, the Filipinos rubbed his thumbs and hands and arms back to life, or he feels he might have been worse off. All their thumbs were badly cut. Jim was put in with a bunch of Filipinos and not touched the first night. They advised him to tell anything he knew. Next morning they strung him up at once, before asking any questions. His thumb became infected. He speaks of how wonderful the Filipinos are—Dixson in jail for the fourth time, accused of sending money to guerrillas; Jo in on the same charge but let out now. Konrad is in for listening to his radio,” Crouter wrote.

Meanwhile it was fortuitous that neither the women knew about the planned escape nor what the socks were for. Otherwise, they would have been meted a severe punishment.

The 32 pairs of socks, in a way, spoke volumes about Camp Holmes. They were a close-knit group, neither was going to tattle on the other. Such esprit de corps tided them over through the end of the war. And every year thereafter it is this bond that would compel them to meet again, and again, and again, to deal with their shared pains and to celebrate their shared joys.