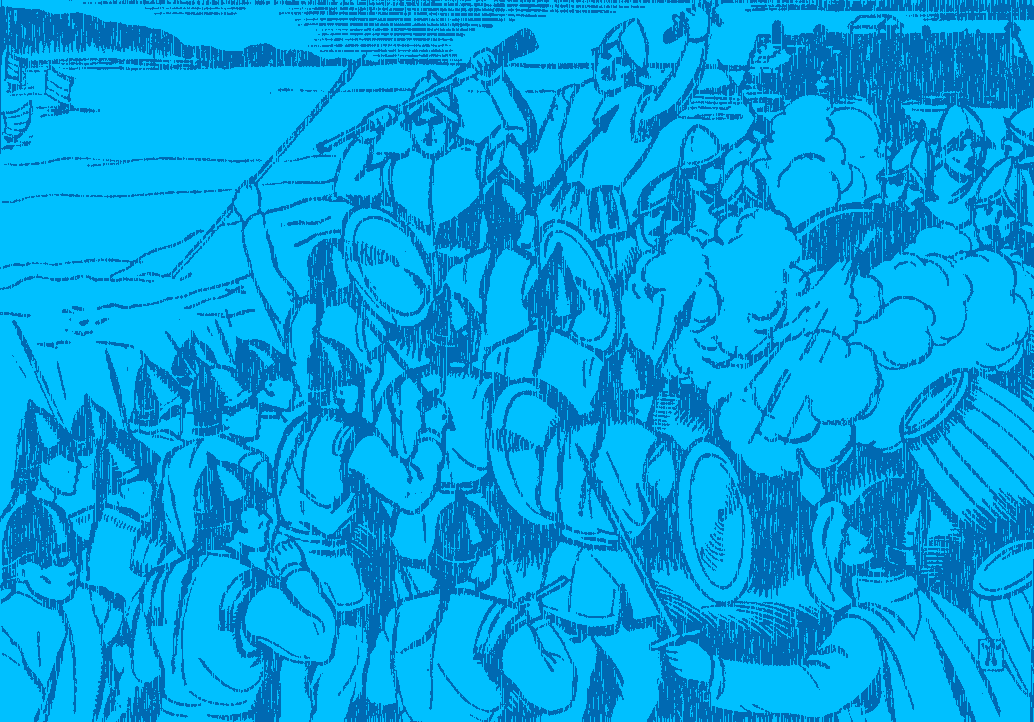 There was a time when marauding pirates were terrorizing the southern coast of China and one of them was Limahong. Expelled by the Chinese fleet, Limahong and his entourage fled southwards towards the islands of the Philippines. En route, Limahong’s group captured a trading vessel from Manila heading back to China, and discovered that Manila was a Spanish garrison of 200 men. Emboldened, Limahong believed he could supplant the Spaniards with a fleet of 60 junks composed of about 6,000 men and women, and families, with the intent of founding their communities there.

Limahong connived with Japanese pirates led by Shoko or Sioco to take on the Spaniards in Manila.

It was 1574. The Spaniards had not been fully entrenched in the city, having founded Manila only in 1571. Martin de Goiti, following the orders of Miguel Lopez de Legazpi, led the expedition that routed the local forces of Raja Sulayman in the Battle of Manila on May 24, 1570. This was how Manila became the capital of the Philippine islands. Earlier, Ferdinand Magellan rediscovered the Philippines in March 1521 by way of Samar, and he was eventually killed in Mactan. Years later, the Spaniards succeeded in establishing the first settlement in Cebu making it the first city under the Spanish colonizers. The first Catholic church in the country was also founded there. From Cebu, the Spaniards set their sights on Manila. Hence, De Goiti was tasked to do this on behalf of the Spanish crown.

Back to Limahong, he deployed Sioco and about 700 men in their first attempt at conquering Manila. Unfortunately, rough waves derailed their voyage as they drifted to Paranaque and from there proceeded to Manila by foot. As they headed towards the direction of Intramuros, they ran into locals. And news reached Intramuros that Bornean bandits had been causing trouble. So de Goiti ordered 10 of his men to quelch the disturbance. However, outnumbered, they were routed by the Japanese pirates who succeeded at reaching de Goiti’s residence. Resisting the attacking bandits was a foregone conclusion: an ailing and old de Goiti and the very few men left were killed in a suicidal attempt to defend Manila. Following their death, the rampaging pirates razed his residence to the ground.

Spreading like wildfire, the news of the attacks reached the garrison. As Sioco and his men marched towards the walled city, they were met by an advance party of Spanish forces; however, as they did with de Goiti, they overwhelmed their Spanish counterparts until reinforcements came that saw Sioco’s men retreating towards Cavite where they reunited with Limahong.

A second attack was planned and the garrison in Manila had anticipated it. Depite Sioco attempting to discombobulate the Spaniards with a three-way attack, he failed at winnowing down the defense at the walls. In this pursuit, Sioco was killed and his men were eventually forced to retreat.

As the lean Spanish forces were warding off the advancing pirates, they were also quelling the pockets of revolt on the side. There were scores of slaves who had escaped and fled via the Pasig River. Elsewhere, in Tondo and Manila, locals ransacked churches and took clergymen as hostages.

As Limahong’s fleet bade their time in Paranaque, the Spaniards on the one hand, summoned reinforcements from Panay, Cebu, and Masbate.

With Spanish forces beefing up Manila’s defense, Juan de Salcedo, whom historian William Henry Scott referred to as the “last of the conquistadores,” dealt with Raja Lakandula whom he convinced into surrendering along with their hostages.

It was a see-saw battle between the Spanish and the Limahong camps. Despite its lean force, the Spaniards were able to defend Manila and inflicted heavy losses on Limahong’s side. But before sailing northward, Limahong had pillaged Paranaque and had burned San Agustin Church in Intramuros. In Pangasinan, the decisive battle ensued between the Spanish and Chinese-Japanese forces months later. With Salcedo at the helm, some 250 Spaniards and 2,500 locals pursued Limahong and his men. Beginning with the blockade of Agno River, Salcedo’s men gradually defeated Limahong’s forces until they infiltrated his fort. Unfortunately, Limahong managed to escape and never to be heard from again.

There were reports that a Chinese emissary tried to negotiate with Limahong in the hopes of securing his services for the Chinese empire. He was offered to serve as a privateer to attack vessels of countries at war with China. Such offer was refused by Limahong.

There were also accounts that Chinese viceroy Wang Wanggao caught up with him off Palau and thwarted his forces; unfortunately, he managed to escape. Some accounts stated he offered his services to the kingdom of Siam, now known as Thailand, and to India.

In hindsight, Limahong and his confederacy of Chinese-Japanese pirates (with some records saying a group of ronins–samurais with no masters) were the very first to seriously contest Spanish control of the Philippine islands. It had led to the further fortification of the walled city and the rethinking of defense strategies. Centuries later, Dutch, British, and German forces would attempt at challenging Spanish control of the islands. The British were successful at occupying Manila and nearby Cavite for 20 months until the conclusion of the Seven Years War resulted in the Treaty of Paris, that eventually led Britain to cede the Philippines back to Spanish control. A more successful effort would later be made by the Americans in the Mock Battle of Manila in 1898 when Admiral George Dewey, coming from Hong Kong, took on the significantly undermanned Spanish forces in Manila. This would end in the signing of the Treaty of Paris in December 1898 which would turn over control of the Philippines and Guam to the United States, with Northern Marianas to be sold by Spain to Germany.