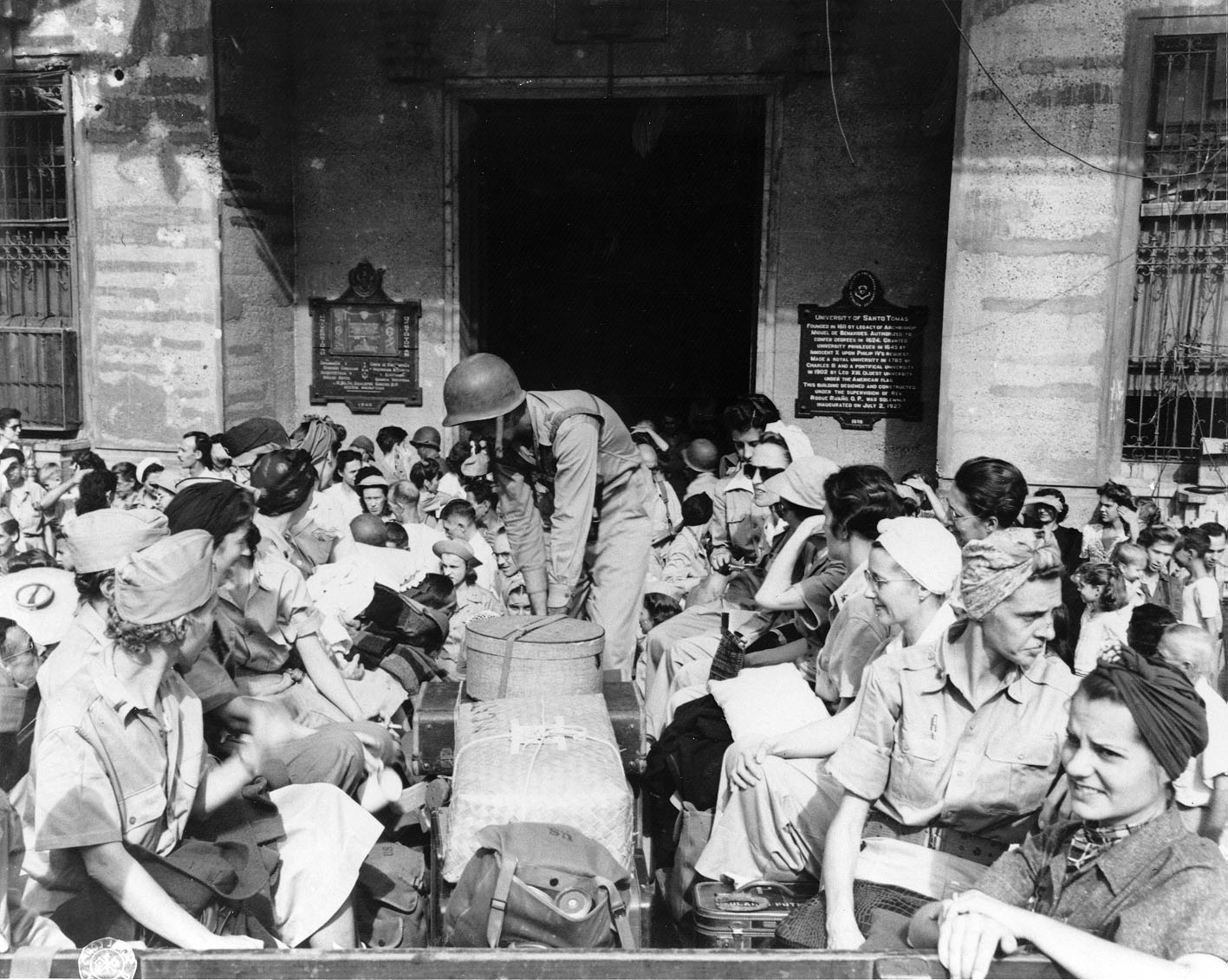 by Lexi Zotomayor
in Pacific, Philippines, Santo Tomas Internment Camp, War in the Pacific
Share on TwitterShare on Facebook

Since fifth grade, she had been dreaming of going to the Philippines. Perhaps it was written in the stars that she would go there after all Capt. Ethel “Sally” Blaine Millett, an Army nurse, from Missouri, finally got the chance she had long been waiting for. Following her nursing training in San Diego in 1939, she entered the US Army at Letterman General Hospital.

“There was a constant list always being put up askin for volunteers to go to the Philippines. Three times this list went up and it was right at the stairwell where we went up to our rooms at night time and every time I saw the list I put my name on the list,” Millett said in an interview in San Antonio, Texas in 2000 for the oral history program of the Nimitz Museum.

The third time worked like a charm for her. She said the last time she signed up she used an ink pen that made her name stand out like John Hancock’s signature.

At the time, there had been an ongoing buildup in the Philippines as they had been sending two ships a month there.

Millett left on the last week of May 1941, remembering that it took 17 days for the ship to travel to the Philippines. By the time she got there, she was immediately sent to Fort Stotsenburg in Sapang Bato, Angeles City, some 80 km north of Manila.

“At Stotsenburg, life was like a picnic. The duty was very light and we were all happy to be there. It was the old regime still in full force. At six o’clock in the evening, all the women had to be in long dresses. Men had to be in white uniform—the formal attire,” she said.

But this was not for long. Millett said she knew something was stirring up.

On the day that Pearl Harbor was to be bombed, she went to bed early, tired from a trip she made from Manila to Angeles City where Stotsenburg was.

Fellow nurse, Willa Hook, roused her from sleeping to let her know that Pearl Harbor had been attacked. Thinking that it took her 12 days to travel from Pearl Harbor to the Philippines so she went back to bed. Not long after, Hook came back, this time, she sensed the urgency. “Get up out of that bed.Camp John Hay has been bombed!” It was more than enough to make her get up and join the others for dinner.

Millett said everything was quiet the morning after. Flyers had gone and came back around 1030. “It sounded pretty good the way they came in,” she said

After lunch, she had gone to her quarters to get ready for her 1300 duty. She remembered raising her leg on the ottoman to tie up her shoelace when she heard a very loud thud. Clark Field had been bombed. She ran towards the window and there was billowing smoke, pitch black. “I knew this was the beginning of war for us,” she said.

She packed her cosmetic bag. “That’s always been my thing. I had to have my lipstick and my powder and my comb with me.”

With her cosmetic bag in tow, she proceeded to her duty. En route, the Japanese returned as they strafed Clark Field.

At her station, she waited for what was to happen next. The strafing stopped, and then came the ambulance bringing casualties.

“We had so many people coming in so fast that we had them put on litters and had them lying on the bare concrete floor, I suppose, outside the building before we could get room for them inside,” she recalled.

She thought the had received more than 100 patients for their little hospital. “It did stress us.”

Patients who could walk were ordered to vacate the wards and were replaced by those newly wounded.

Although the strafing stopped, the bombing, however, continued.”They bombed us every day.”

The day before Christmas they had to evacuate.

On Dec. 24th, the Japanese were bombing the post and everyone had to take cover. For Millett, her hiding place was a culvert that had a drainage pipe about 12 inches in diameter.

As she snuck inside the culvert she got her boot stuck. She couldn’t get out until their Filipino cook helped extricate her.

They boarded a bus heading for Manila while the patients were boarded on the train. Fort Stotsenburg was closed.

As she was in a hurry, she couldn’t help but think about her beautiful dresses left behind in her closet. She could only take with her a barracks bag and of course, her cosmetic bag.

Soon, Sternberg General Hospital in Manila was not safe for them as well. Millett said the Japanese had begun bombing Cavite.

With Manila not safe anymore, Sternberg had to empty its wards and evacuate patients to safer ground—Bataan.

There in Bataan, at Limay, Millett said General Hospital #1 was set up. “And that hospital functioned only until about the middle of January(1942).”

Another setup was in a place called Little Baguio where they had 18 wards.

On April 9 (Fall of Bataan), they medical staff were forced to leave their patients behind as they had to scamper to safety.

The plan was to evacuate the team to Australia.

She climbed up a sedan with four other nurses and one nurse had to stand on the running board as it was already crowded in the back. They didn’t go far because the car ran out of gas. So, they started disembarking and began walking until a second vehicle stopped to pick up some of them. The others had to go on foot to Mariveles pier where a boat had been waiting to ferry them over to Corregidor.

For Millett, it was one misfortune after another that night.

She lost the contents of her bag; the car they rode in had to stop often to refill the leaking radiator with water.

They left Hospital #2 at 2000hours the night before and arrived at the pier around 0700 the following morning. And they missed their ride.

Luckily, the man from who she asked about the trip to the Rock offered to take them there.

The nurses were expected to rendezvous on Corregidor where planes would take them to Australia.

On April 29, 1942, two PBY planes left Corregidor with 20 Army Nurses and other passengers. At a refueling stop by Lake Lanao, on Mindanao, the plane that was supposed to take Millett’s group to Australia had hit a rock, ripped a hole in the fuselage, that flooded the cabin.

Millett remembered that one of the nurses, Rosemary Hogan, even tried to plug the hole with her tennis jacket to stanch the flooding. But to no avail. They had to disembark. So they moved from place to place.

According to Millett, they stayed at an airstrip for three days hoping for another plane to rescue them.

Left stranded in Mindanao were 10 Army nurses, three women dependents, one naval officer, and one army colonel. They tried to hide from Japanese from house to house, from farm to farm, until they ran out of options. They surrendered on May 11, 1942. (To be continued)